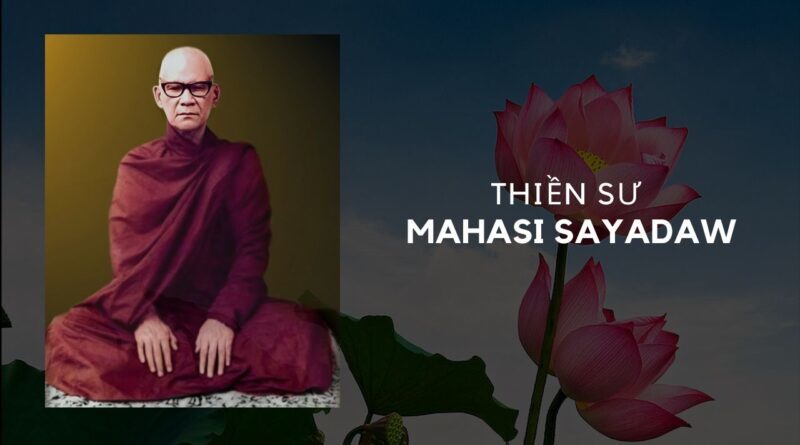 Vipassana Meditation – THE METHOD IN BRIEF (BY MAHASI SAYADAW)

If a person, who has acquired the knowledge of the phenomenal nature of mind-and-body, impermanence, suffering, and non-self as stated in the Advanced Dhamma sections, desires to practise vipassana pure and simple, he should retire to a quiet place and seat himself cross-legged or in any convenient manner so as to enable him to sit for a ling time, with body erect, and then contemplate by fixing his attention on the physical and mental phenomena, i.e. upadanakkhandha, or the Five Aggregates.

These phenomena should be continuously contemplated and noted on every occasion of their arising in the body. ‘Upadanakkhandhas’ or the Five Aggregates means the phenomena of existence which are clearly perceived at every moment of seeing, hearing, smelling, tasting, touching and arising of mind-consciousness. At the moment of seeing both the visual object and the eye where seeing takes place, are perceived. These two things are of the material group. They are neither pleasurable nor atta, the living soul, nor self. However, those who fail to contemplate the phenomena on every occasion of their occurrence, do not realize that “they pass away immediately and are not permanent.” Nor they realize that these incessantly arise and disappear and are, therefore, mere sufferings; nor do they understand that “they are neither self nor living entity, and are non-self in the sense that they are subject to the law of cause and effect and are arising and passing away of their own accord.

For this lack of knowledge, the object which is seen and the eye, which sees are considered as things pleasurable, and hence, attachment follows. Blinded by illusion, they become attached to life existence as ‘living substance or self,’ living soul,’ and ‘self.’ Because of this wrong mental attitude and attachment, the known visual object and the eye are called “aggregate of material body .” Furthermore, eye-consciousness (cakku-viññana), feeling (vedana), perception (sañña) of visual object, and exertion to see the visual object, mental volitional energy (sankhara) are also clearly perceived at the moment of seeing. They are merely of the mental group. They are neither pleasant, a living entity, nor self. i.e. existence as an individual personality.

Though the material and mental phenomena are obviously taking place at every moment of seeing, hearing, etc., in the six spheres of senses, it is not possible for a beginner who is meditating, to contemplate or become mindful of all the occurrences in sequence as they arise. In Vipassana, it is essential that the most out-standing manifestation of the phenomenon in the body shall be contemplated first. It is just like in school where easy lesson to learn is taught at the beginning of the studies.

Therefore, of the two constituents of matter (body) and mind. the more outstanding material phenomena should first be contemplated. Among the physical or material phenomena, the tactile bhuta-rupa which is more manifest than the objects of sense-doors (upadana-rupas) should be chosen as the preliminary and prime object of contemplation at the beginning of the practice. Hence, with a view to noting the particularly outstanding bodily-contact, concentration should be made on the sitting posture of the entire body and contemplate continuously by making a mental note as sitting, sitting.

To illustrate the manner of contemplation: firstly, the mind should be attentively riveted on the abdomen. It will then be noticed that the abdomen is rising and falling and that these movements take place in continual succession. If, at the beginning of practice, the movement is not clearly felt by fixing attention on the abdomen, one or both hands be placed on it. Suspension of breath, and quick or deep breathing should not be done. The natural course of normal breathing should be maintained. As and when abdomen is rising, contemplate noting as ‘rising.’ The gradual rising of the abdomen from start to finish should be continuously noted without a lapse or without a break in the process of noting. The gradual ‘falling’ of the abdomen must also be contemplated in the same manner.

Every act of ‘rising’ and ‘falling’ should be noted continuously and contemplated as ‘rising,’ ‘falling,’ ‘rising,’ ‘falling.’ For particular attention, it may be mentioned that the words ‘rising’ and ‘falling’ should not be uttered by mouth, but repeated by saying mentally. In fact, words are not of real significance. To know the actual movements of the abdomen and the feeling of sensations that arise in the body is of fundamental importance. If the contemplation is carried on by the simple act of mental observation without the act of mentally repeating the words, the contemplation will be casual and ineffective with many drawbacks such as, failing attention to reach closely enough to the object to which it is directed, failing to clearly distinguish and perceive the phenomena part by part respectively, and the deterioration of the necessary force of energy to contemplate.

If any disagreeable sensations (dukkha-vedana) such as, tiredness in limbs or feeling of hotness or pain etc., arise in the body, attention should be fixed on the spot where sensation arises and contemplation carried on as ‘tired, tired,’ ‘hot, hot,’ or ‘painful, painful,’ as the case may be. When the disagreeable sensation ceases, “rising and falling” of the abdomen must again be contemplated continuously. Only when the painful sensations are so acute that they become unbearable, then the posture of the body, and the position of hands and legs have to be changed to get relief. When the act of changing is to be resorted to, attention should be fixed on the behaviour of the bodily movements and contemplation carried on as ‘bending,’ ‘stretching,’ ‘swaying,’ ‘moving,’ ‘raising,’ ‘dropping down,’ etc., in the successive order of the changing process.

When walking, every movement involved in the process of taking steps should be carefully noted from start to finish and contemplated as ‘walking, walking,’ or ‘taking step, taking step,’ or ‘lifting,’ ‘stepping,’ and ‘dropping down’ (putting down). Briefly put, contemplation should be made on all actions of body and limbs, such as bending, stretching, raising, moving, etc., so as to perceive them in their true perspective as they occur. Physical sensations and mental feelings (vedana) should also be contemplated to know their true nature as they arise. Every mental activity such as thoughts, ideas, reflections, etc., should be contemplated to realize their true nature as they occur. In the absence of any special phenomenon while remaining calmly in the sitting or lying posture, contemplation should be carried out by fixing the attentio n on any of the bodily contacts.

Instructions are, therefore, given here to dwell your mind upon the rising and falling movements of the abdomen, which are easy to explain and contemplate as primary or main objects in contemplation. But, if desirable, either the contemplation of the sitting posture of the body and of bodily contact or the contemplation of the feeling of contact in the flow of respiration (inward and outward breathing) can be carried out as fundamentals in meditation. When contemplative attention can be easily fixed on any phenomenon as it arises, there is no need to contemplate on the aforesaid fundamentals. In that case, contemplation should be made noting every phenomenon of seeing, hearing, smelling, tasting, feeling of bodily contact consciousness of thoughts and reflections as and when they arise. If the meditator (disciple), who is carrying out continuous contemplation in the aforesaid manner and who has thereby developed samadhinana, will personally perceive the arising and dissolution or passing away of the mind for several times within a second.

But a meditator who is a beginner in the practice of contemplation cannot possibly perceive the extremely fast phenomena that are taking place. It may be comparable to the case of a person who is a novice in learning how to read and to that of a person who is well-advanced in studies, one of whom can read much faster than the other who is slow. Nevertheless, a person who has just begun the practice of meditation should endeavour to practise contemplation so that the can make note of the arising phenomenon with awareness not less than once in every second.