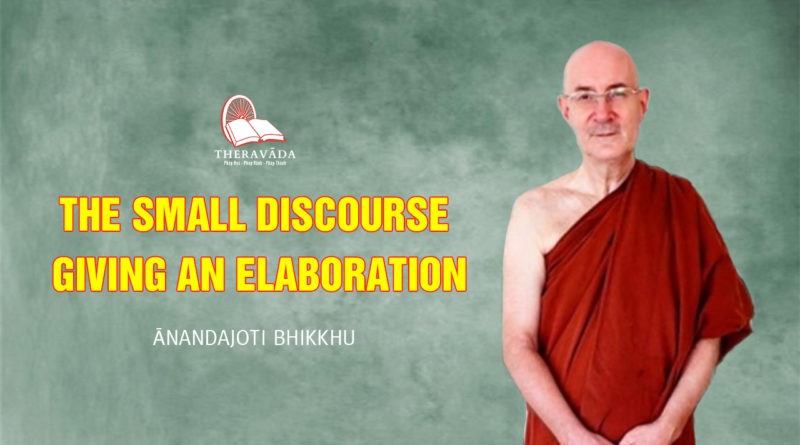 The Small Discourse giving an Elaboration

Text and Translation by Ānandajoti Bhikkhu

Introduction
What follows is a record of a conversation between the Arahat nun Dhammadinnā and her ex-husband, the Non-Returner (Anāgāmī) Visākha. The basis for the story is that Visākha had been amongst the first to hear the newly awakened Buddha teach, and had on that occasion attained Stream Entry, and subsequently the state of a Non-Returner.

As he was no longer able to live a normal householder’s life his wife Dhammadinnā decides to go forth herself, and in no long time she attains Arahatship while in the countryside. She then returns to the capital, and Visākha, hearing of her sudden return, decides to visit her to find out if she is dissatisfied, or if she has understood the teaching.

Rather than asking her directly, however, he decides to ask her questions on the teaching, and to judge for himself from the answers she gives. The discourse then consists of a series of questions asked by Visākha and the profound answers given by Ven Dhammadinnā.

It should be noted that this is a very important turn of events given the context of ancient Indian society, for here it is the woman who attains to the higher level, and the ex-wife is now seen as able to teach her husband, and the husband as willing to learn from her. At the end of the discourse Visākha relates all that passed between them to the Buddha and he confirms that the teaching is exactly as he would have given it himself, thereby making it his own word (Buddhavacana).